Altin Merlaku, “Star of the week” 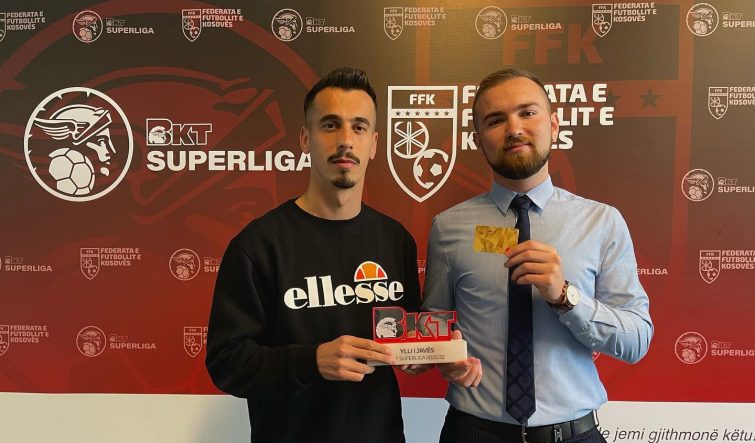 The Football Federation of Kosovo together with the sponsor of the Super League, BKT Kosova, continue the awarding of the prize “Star of the week”.

This award for the 30th round in the BKT Superleague belonged to the football player of KF Dukagjini (Klina), Altin Merlaku. The captain of the Klina team had an excellent performance in the victory that KF Dukagjini (Klina) achieved in front of its fans against Gjilan, with a result of 2: 0. Altin Merlaku scored both goals in the very important victory of Armend Dallku’s team in the fight for survival.

He scored twice within three minutes, placing the issue of the winner, in the 33rd and 36th minutes, while throughout the match he stood out with commitment and creativity. After this victory, Dukagjini raises hopes to avoid the position he sends in the draw. Currently there are 36 points, as much as Drenica is in 7th position.

The “Star of the week” award for the football player of KF Dukagjini was delivered by Endrit Zenunaj, a specialist at BKT.